Are Your Products Really Organic?

Yes. Where possible we use organic ingredients from certified companies. However, there are some ingredients that are not directly organic due to their manufacturing processes, but have achieved a GRAS status. One of such is piperine, such as BioPerine®, a natural bioavailability enhancer from Sabinsa Corporation, it received Generally Recognized As Safe (GRAS) status after a comprehensive review of safety and toxicology data by an independent panel of scientists with international repute.

BioPerine® is a patented extract obtained from black pepper fruits (Piper nigrum) standardized minimum to 95% Piperine. BioPerine® has been used as a bioavailability enhancer for over 20 years.

We may use similar ingredients, which have been obtained in a similar way, which may not be organic but are still natural such as Vitamin C (sodium ascorbate).

Do You Use Any GMO Ingredient?

It is cheaper to use GMO ingredients, but at SerraHappy.com (owned by NeatResearch Laboratories), we do not use GMO, chemical fillers, Parabens, Phthalates, Propylene Glycol or Synthetic Colours, PEGS, EDTA, Sulphates, or Petrochemicals.

All our ingredients are GRAS – “Generally Recognized as Safe.”

We believe the largest organ in the human body deserves better than some cheap and possibly toxic ingredient. We use natural extracts and ingredients only. So, you can be very relaxed about any of our products that they are the best possible in the market.

I’m on Some Medication, Can I Take Your Products?

Our products are food supplements, but if you are on prescribed medication for some health issues, please ask your health care adviser or doctor, before using our products. Our products are not drugs. They are like concentrated food nutrients that are vital for good health.

What If You Are Currently Taking Prescription or Over-the-counter OTC) Drugs?

Although our products are all-natural products, we do recommend that anyone taking medication consult their health-care practitioner prior to taking ANY nutritional supplement.

To Whom Would You Recommend Your Supplement?

Family, Friends or Anyone?

All the Above. Anyone who wants to look and feel younger – from young adults to much older people. It is a way of getting all the essential nutrients the body truly needs to be at peak function.

Does This Contain Soy? I heard that Soy is GOITROGENIC?

No, none of our products contain soy. Soy has a lot of side effects, one of which is reported to be goitrogenic (thyroid suppressing). Goitrogens work by preventing your thyroid from getting the necessary amount of iodine. Friends, I believe this is what happened to Oprah’s thyroid. She pushed soy for years, featured it in everyone one of her “healthy” diets, and it destroyed her thyroid. If your thyroid fails, what happens? You gain weight. You have a harder time regulating your moods. You get colder more easily. You’re more easily fatigued.

Amyloid is a protein that forms plaques in the brains of people with Alzheimer’s. It is also typically present in Parkinsonians with cognitive impairment. Amyloid is a description of proteins which have folded abnormally and then collected together. In this form, they do not break down as easily as normal proteins and can build up in tissues and organs. If this build-up causes the tissues or organs to stop working properly, the resulting conditions are called amyloidosis. (NHS UK).

Amyloids form in in tissues and organs throughout the body.

Our SerraHappy serrapeptase dissolves this dangerous plaque where ever it finds them in the body – heart, arteries, eyes, and even brain!

What Is Fibrin? Can SerraHappy Reduce It?

Fibrin (also called Factor Ia) is a fibrous, non-globular protein involved in the clotting of blood. It is formed by the action of the protease thrombin on fibrinogen which causes it to polymerize. The polymerized fibrin together with platelets forms a hemostatic plug or clot over a wound site.

Scar tissue is fibrous, connective tissue – made primarily of fibrin – which the body uses to replace previously healthy tissue that has been destroyed by injury or disease. Under normal conditions, scar tissue should be the final result during typical inflammatory response.

SerraHappy’s serrapeptase helps dissolve fibrin. Fibrin in blood can clog arteries and lead to various inflammatory diseases. Nattokinase and Serrapeptase are the two essential fibrinolytic enzymes that break down fibrin and cleanse blood. Bromelain is another enzyme that reduces fibrin but it can’t dissolve the already formed fibrin clumps.

Let John Gray, PhD. explain further in the video below:

Is SerraHappy A Drug? What Is the Difference If It Isn’t?

Neither SerraHappy nor any of our other products are drugs. It is a dietary supplement. A dietary supplement is intended to provide nutrients that may otherwise not be consumed in sufficient quantities. Supplements as generally understood include vitamins, minerals, fiber, fatty acids, or amino acids, among other substances and they are generally recognized as safe (GRAS).

But a drug affects you physiologically with side effects as well, and they have to go through rigorous checks before they are allowed for consumption by the public.

One major difference is that if you can find all the nutrients in a food supplement in your main diet, in sufficient quantities, then you can do without a food supplement. The same can’t be said of pharmaceutical drugs. This fact makes some supplements to be MUCH BETTER than drugs!

Dietary supplements are available without a prescription through a number of retail outlets including grocery stores,  natural food stores and specialty health and nutrition stores. Many dietary supplements can also be purchased online through the Internet.

When Can I Get My Products? How Soon Do You Ship?

Once your order is confirmed, we ship within 24 hours on any working day and also send you a confirmation that your goods are on the way. If you do not see an email from us immediately after your purchase, check your SPAM box. Please make sure you whitelist us in Email Box.

11.5 You may exchange the item for something else, subject to stock availability, or receive a full refund of the price paid (excluding any delivery charges).

11.6 The refund can only be made to the card used when paying for the order. We will email you when the item has been received and will inform you when the credit has been made to your card account. This is normally within 14 days of receipt of the goods.

11.7 If you wish to exchange an item, you will have to pay any difference in cost of the item and any additional delivery cost. We will tell you what this is so you can arrange payment.

11.8 You may also return your used purchase if you have taken part in the 60-Day-Challenge, however, contact us and we will send you a simple return form, with which we can identify your purchase by the returned product and hence refund your money (excluding shipping costs).

11.9 You are responsible for the return shipping costs and original postage fees. If you received free delivery, the actual delivery cost paid by Rumba Nutrition or SerraHappy will be deducted from any refund to be made.

You can also read up on our refund policy and return processes here.

Are You Signed Up to the PayPal Buyer Protection Scheme?

We have signed up into the PayPal Buyer Protection Scheme. It means – “If an eligible item that you’ve bought online doesn’t arrive, or doesn’t match the seller’s description, our Buyer Protection will reimburse you for the full amount of the item plus postage and packaging costs. Buyer Protection covers eligible online purchases on eBay or on any other website, when you use PayPal.” Read more here at PayPal.

Web browsers give visual cues, such as a lock icon or a green bar, to make sure visitors know when their connection is secured. We have been through and passed a rigorous online audit before being awarded a Secured Socket Layer (SSL) Green Bar. This means that you can trust our website more when you see these cues and should be more confident to buy from us.

HTTPS also protects against phishing attacks. A phishing email is an email sent by a criminal who tries to impersonate a website. The email usually includes a link to their own website or uses a man-in-the-middle attack to use a genuine domain name. Because it is very difficult for these criminals to receive a proper SSL certificate, they won’t be able to perfectly impersonate our site. This means that you will be far less likely to fall for a phishing attack because you can easily look for the trust indicators in your browser, such as a green address bar, and you won’t see it.

SSL is required for PCI Compliance

In order to accept credit card information on our website, we had to pass certain audits that show that we are complying with the Payment Card Industry (PCI) standards. One of the requirements is properly using an SSL Certificate.

Can Someone Undergoing Radiotherapy Take These Supplements?

KEEP OUT OF REACH OF CHILDREN.  DO NOT USE (for the first time) IF PREGNANT OR NURSING.  DO NOT USE IF SUFFERING FROM LIVER/KIDNEY STONES. Ask your healthcare or doctor before taking any supplement.

Is Curcumin Same as Turmeric?

No. Curcumin is not same as turmeric. Curcumin is one of the key ingredients of turmeric, along with several others. Curcumin, however, is most studied one though and responsible for most of its health benefits.

“I frequently recommend turmeric supplements, and I believe whole turmeric is more effective than isolated curcumin for inflammatory disorders, including arthritis, tendonitis, and autoimmune conditions. Take 400 to 600 milligrams of turmeric extracts (available in tablets or capsules) three times per day or as directed on the product label. Look for products standardized for 95 percent curcuminoids. Neither curcumin nor turmeric taken orally is well absorbed unless taken with black pepper or piperine, a constituent of black pepper responsible for its pungency. When shopping for supplements, make sure that the one you choose contains black pepper extract or piperine. (If you’re cooking with turmeric, be sure to add some black pepper to the food.). Be patient when taking turmeric supplements: the full benefits may not be apparent for eight weeks.” – Andrew Weil, M.D.

Based upon the research and scientific evidence we have covered, we would suggest that turmeric is superior to standalone curcumin. Yet there are certain conditions such as cancer where curcumin supplements may work better.

Let’s now see what research studies talk about when comparing curcumin and turmeric.

Most supplements are sold on the basis that curcumin is the only good thing in turmeric, but that is not the case. Turmeric without curcumin has also been proven as an effective anti-inflammatory ingredient.

Turmeric also has been shown to help rebuild brain nerve cells. According to a new study, researchers at the Institute of Neuroscience and Medicine in Julich, Germany found that rats injected with aromatic-turmerone, a compound found naturally in turmeric, showed increased activity in parts of the brain associated with nerve cell growth. See:

Use our Organic SupremeTurmeric, which has been boosted in three forms – timed-release enteric effect capsule, piperine and quercetin. This ensures a maximum absorption.

Here is a video:

Yes. Its use became more common in the United States in the mid-1990s. The enzyme is thought to help ease inflammation and pain when taken several times a day. Serrapeptase works by targeting “dead” material in the body–including things like scar tissue and fibroids (benign tumors that usually appear in a women’s uterus).

Feel free to contact us any time. See below for information about the delivery & returns options in your country. 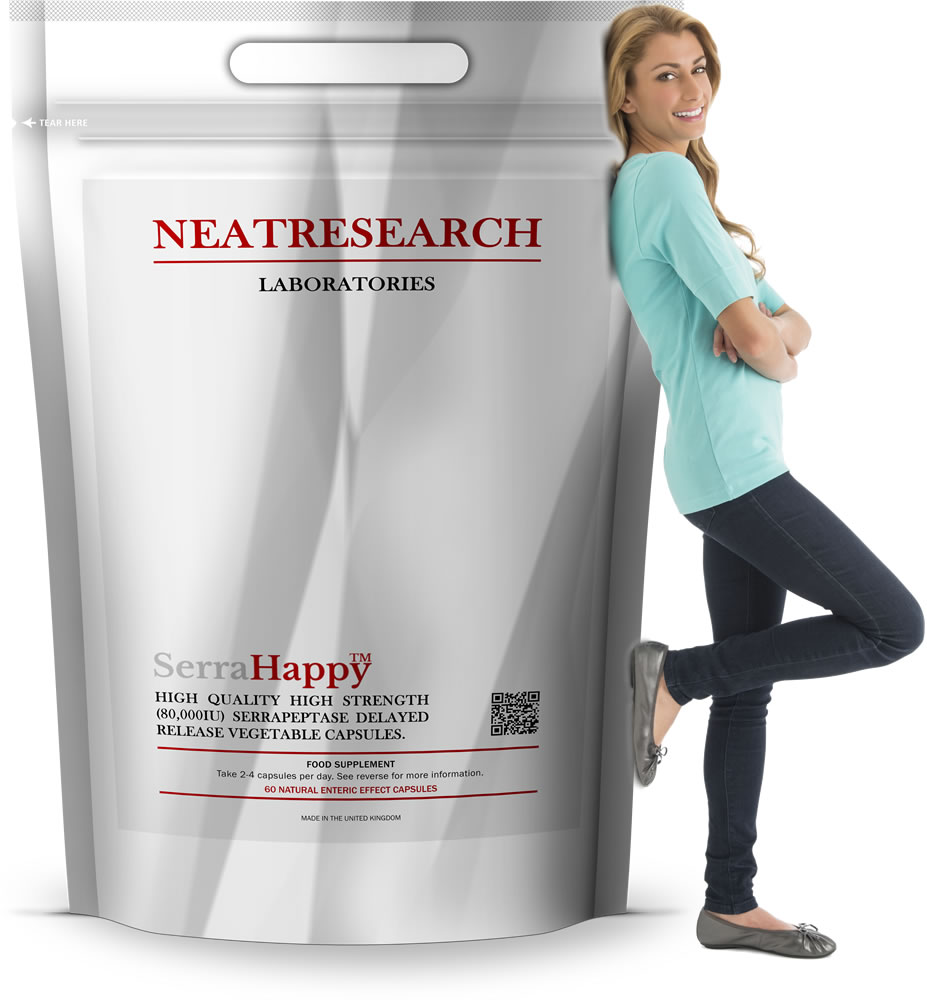